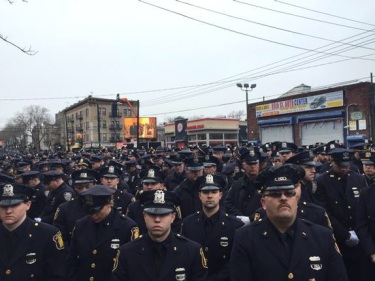 Against the clearly stated wishes of the family, thousands of NYPD officers in attendance at the funeral of officer Wenjian Liu turned their backs in protest as Mayor Bill De Blasio gave remarks at the service. Their protest was fueled by a belief that De Blasio and the thousands of anti-police brutality protesters “created” the climate that lead to the murder of Liu and fellow Officer Rafeal Ramos by a mentally deranged man who reportedly “acted in revenge” for the deaths of Michael Brown and Eric Garner. I do not wish to spend any time in this post responding to those erroneous claims. I have refuted them here. In this short post,  I want to zoom in on the picture below and the lesson it teaches followers of Jesus who desire to be salt & light agents of restoration & justice. 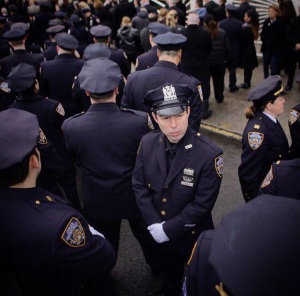 In the above picture a police officer goes completely against the grain of the institution that he is a part of. The majority of his police department turned their backs on the Mayor in protest and in my humble assessment,  metaphorically turned their backs on compassion, truth, and  justice. Yet, he decides to keep his face towards the mayor and metaphorically towards compassion  and justice. This is precisely what it looks like to bear witness to the Kingdom of God in the idolatrous & unjust kingdoms of this world. It demands clear, concise, visible, and counter-cultural ways of Spirit-empowered living. It requires leaving the safety of “playing the middle ground” to stand in the place that Jesus stands. As I looked at the photo, I couldn’t help but wonder what was going through the officer’s mind. Had he counted the costs? Had he wrestled with the fact that he’d be marked by his co-workers as an outsider? Will he consider leaving the force or has he made a conscious decision to remain IN it but not OF it?

Anybody that has ever made any kind of unpopular stance as an act of worshipful obedience to Yahweh knows this feeling. It really doesn’t matter the vocation or sphere of influence. This is down right difficult! You will take heat for it, just as Pittsburgh’s Chief of Police has for his recent strides. (see pic below) 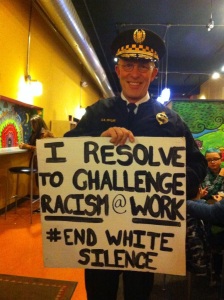 Pittsburg Chief of Police makes bold resolution to fight against systemic racism within his own department.

However, when institutional structures oppress God’s image bearers, injure the vulnerable, stifle creativity, & hinder progress we must find the courage to draw “outside the lines”. This does not necessarily mean that we abandon our jobs, school systems, political parties, firms, churches, etc. It means that we learn how to be “IN them” but not “OF” the ways in which they have failed to fulfill their sworn purposes. So often folks catch the next flight out of town and move on to the next job and miss an opportunity to bring healing and change.

Staying “inside” will inevitably create internal tension & external friction. Resist the urge to flea into the false comforts of the status quo. Embrace the tension & friction with the understanding that meaningful change never occurs minus struggle. There is a cross we must joyfully bear. There are pains we must endure as we cling to the Peace of Christ that transcends our intellect.
A joy that overlooks injustice and a peace that avoids the pains and conflicts of this world is not from Jesus. Joy does not flow from the absence of sorrow and pain. It is the outflow of God’s presence IN the midst of sorrow and pain. The truly joyful heart can engage in lament over the state of this world because the root of its joy is “extraterrestrial”…not of this world. The old saints used to sing: “This joy that I have, the world didn’t give it and the world can’t take it away!” This “other worldly” joy does not gives us license to disengage from the “here and now” as we long for the “hereafter”. It empowers us to  ACT in the present, for the kingdom of God is not “OF this world” but is definitely FOR this WORLD.

“Your Kingdom come your will be done on earth as it is in heaven!”

As the Spirit of Christ leads in 2015, let us not abandon our vocational posts within institutions.  May we collectively learn how to work for renewal in AND outside of the present structures. “Who knows? Maybe God has you raised you up for such a time as this?”
Happy New Years!