Ever been to a Super Bowl party and had a conversation with a very outspoken person with TONS of opinions & “insights” on the BIG game. As you talk to them it becomes clear that they themselves have not watched either team play ONE solitary game the whole season. They don’t know ANY statistics, haven’t engaged with any professional sports analysts, and really don’t have a descent understanding of the nuances of the game of football itself. Yet, when a big game like a Super Bowl happens they confidently assert their opinions with very little acknowledgment that they could be VERY ignorant.

This is how many of us engage the issues of race, social justice, and reconciliation in America and the Body of Christ. We have not spent time praying, reading, learning, engaging the statistics, and sitting under people who have committed their lives to wrestling with these issues with truth and love. Yet when BIG tragedies and events that illuminate the racial divide that already exists in America many people make bold and confident statements about what’s going on. We look for news outlets and friends that will back up our assumptions and “gut instincts”. We discount the arguments of oppressed people & declare that they are “playing the race card”.  Simple logic would say to us all that our ability to address and understand the nuances of an issue we rarely engage would not be very strong. Perhaps it would be much wiser to engage with people who labor to understand the racial, cultural, and class dynamics at play in our society and in The Church. Admittedly, it can be an unsettling and uncomfortable process but it pays great dividends. Every lie and misconception you uncover and every truth you accept will prepare you to be a better ambassador for reconciliation and justice in our fractured world.  This is central to the way of Jesus, the “Just One” who died for the “unjust” to bring us to God” and conform us into His image.

The following is a sort of “starter kit” of resources put together by the Drum Majors Alliance for Justice & Reconcilaition for those seeking to go deeper. Its broken down into 5 categories. 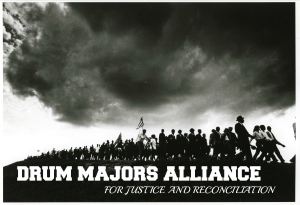 THE FOLLOWING RECOMMENDATIONS SHOULD NOT BE  VIEWED AS AN ENDORSEMENT of EVERY VIEW & BELIEF ARTICULATED BY AUTHORS.
RECONCILIATION BOOKS

Divided By Faith- Michael O. Emerson, Christian Smith
One of the quintessential books on racial division in Evangelicalism.  A must read for the person seeking to understand the dynamics that keep our churches separated. “[E]vangelicals desire to end racial division and inequality, and attempt to think and act accordingly. But, in the process, they likely do more to perpetuate the racial divide than they do to tear it down.”

Disunity In Christ- Christena Cleveland
Combining Faith, Reconciliation, & Social Psychology this book does a great job of unpacking why “we cluster in theological groups, gender groups, age groups, ethnic groups, educational and economic groups”. A great resource for leaders looking for practical ways to build bridges and work towards the vision of unity Jesus prayed for in John 17.
The Elusive Dream: The Power of Race In Interacial Churches  – Korie L. Edwards
This book “presents the surprising results of an in-depth study of interracial churches: they help perpetuate the very racial inequality they aim to abolish. To arrive at this conclusion, she combines a nuanced analysis of national survey data with an in-depth examination of one particular church. She shows that mixed-race churches adhere strongly to white norms.”

Blood Brothers- Elias Chacour
“This is a story about people–not politics. This riveting real life story…reveals a little known side to the Israeli-Arab conflict” and wrestles with the question:  “Can bitter enemies ever be reconcilied?”

Radical Reconciliation- Curtis DeYoung, Allen Boesak
“Reconciliation is ofter understood today as assimiliation, appeasement, a passive peace, and unity without cost , and maintaining power with only cosmetic changes.” Boesak & DeYoung thoroughly expose this idea of reconcilation as bankrupt and unbiblical and push readers towards a much more radical understanding!
Books on the Biblical Call of JUSTICE

Overrated- Eugene Cho
“Many people today talk about justice but are they living justly? They want to change the world but are they being changed themselves? Eugene Cho has a confession: “I like to talk about changing the world but I don’t really like to do what it takes.” Cho does not doubt the sincerity of those who want to change the world. But he fears that today’s wealth of resources and opportunities could be creating “the most overrated generation in history. We have access to so much but end up doing so little.”

Jesus & the Disinherited- Howard Thurman
This classic book is regarded as the “bible” of the civil rights movement. Theologian and spiritual advisor to Martin Luther King, Jr., Howard Thurman, seeks to place Jesus in the social space he occupied as a poor Jewish minority under religio-political oppression.  Thurman “demonstrates how the gospel may be read as a manual of resistance for the poor and disenfranchised” driving in the truth that only “through love of one another…can God’s justice prevail”.
With Justice for All: A Strategy for Community Development- John M Perkins
Legendary pastor, community developer, & civil rights activist, John Perkins, is “persuaded that the Church, as the steward of this gospel, holds the key to justice in our society.” “With Justice for All” is an “invitation to live out the gospel in a way that brings good news to the poor and liberty to the oppressed.” Extremely practical, it gives a blueprint for christian community development in marginalized communities.

Where the Cross Meets the Street- Noel Castellanos
“In Where the Cross Meets the Street Castellanos shows the strengths and limitations of a narrowly focused church and broadens our imaginations to embrace a gospel that proclaims Christ and forms disciples. This life-giving gospel also demonstrates compassion, confronts injustice and restores individuals and communities to wholeness. This is the whole work of the cross; this is the privilege of those who follow the Word made flesh.”

My Name is CHILD of GOD….Not “Those People” -Julia K. Dinsmore
This personal and provocative look at poverty in America is shaped around the author’s own engaging stories, song lyrics, and poems, including the well-known Call Me Child of God … Not Those People. Through her stories and reflections, Julia Dinsmore puts a face on poverty and challenges readers to answer God’s call to respond to poverty and its effects.
BOOKS on SOCIOLOGY & RACIAL HISTORY

The New Jim Crow: Mass Incarceration in the Age of Colorblindness–              Michelle Alexander

You’ve met “Jim Crow Sr.” but have you met his son “Jim Crow Jr.”? This book” challenges the notion that the election of Barack Obama signals a new era of colorblindness. With dazzling candor, legal scholar Michelle Alexander argues that “we have not ended racial caste in America: we have merely redesigned it.” By Targeting black men through the War on Drugs and decimating communities of color, the U.S. criminal justice system functions as a contemporary system of racial control…”

“1963 was the year America lost the illusion of innocence. It was a year that began with George Wallace declaring “segregation today, segregation tomorrow, and segregation forever,” and concluded with Martin Luther King being named Time Magazine’s Man of the Year. It was a year that cemented our current Cuban policy and shaped the events in Vietnam.” Theologian and author, Byron WIlliams takes you on a riveting journey of the hope & hostility that characterized 1963. Each step on this eye opening journey has relevance for today!

“Most people assume that racism grows from a perception of human difference: the fact of race gives rise to the practice of racism. Sociologist Karen E. Fields and historian Barbara J. Fields argue otherwise: the practice of racism produces the illusion of race, through what they call “racecraft.” And this phenomenon is intimately entwined with other forms of inequality in American life. So pervasive are the devices of racecraft in American history, economic doctrine, politics, and everyday thinking that the presence of racecraft itself goes unnoticed.”

More Than Just Race: Being Black and Poor in the Inner City– William Juilius Wilson

“In this timely and provocative contribution to the American discourse on race, William Julius Wilson applies an exciting new analytic framework to three politically fraught social problems: the persistence of the inner-city ghetto, the plight of low-skilled black males, and the fragmentation of the African American family…..Wilson dares to consider both institutional and cultural factors as causes of the persistence of racial inequality. He reaches the controversial conclusion that….public policy can only change the racial status quo by reforming the institutions that reinforce it.”

Being Latino in Christ- Orlando Crespo

Life as a Latino in America is complicated. Living between the two worlds of being Latino and American can generate great uncertainty. And the strange mixture of ethnic pride and racial prejudice creates another sort of confusion. Who are you as a Latino? Who are you as an American? What has Christ to say about your dilemma? How can you accept who you are in Christ with joy and confidence? Puerto Rican Author Orlando Crespo provides answers.

Being White: Finding Our Place in a Multi-ethnic World – Paula Harris, Doug Schaupp

“What does it mean to be white? When you encounter people from other “races” or ethnicities, you may become suddenly aware that being white means something. Those from other backgrounds may respond to you differently or suspiciously. You may feel ambivalence about your identity as a white person. Or you may feel frustrated when a friend of another ethnicity shakes his head and says, “You just don’t get it because you’re white.” This book explores the questions: “What does it mean to be white? How can you overcome the mistakes of the past? How can you build authentic relationships with people from other races and ethnicities?”

One Church Many Tribes- Richard Twiss

“In this captivating chronicle of the Native American story, Richard Twiss of the Rosebud Lakota/Sioux sifts through myth and legend to reveal God’s strategy for the nation’s host people. With wit, wisdom and passion, Twiss shows God’s desire to use the cultures of First Nations peoples–in all their mystery, color and beauty–to break through to those involved in New Age mysticism, Eastern religions, even Islam.“

The Cross and the Lynching Tree- James Cone

“The cross and the lynching tree are the two most emotionally charged symbols in the history of the African American community. In this powerful new work, theologian James H. Cone explores these symbols and their interconnection in the history and souls of black folk.”

Race: The Power of An Illusion (documentary uncovers the myth of “race”)