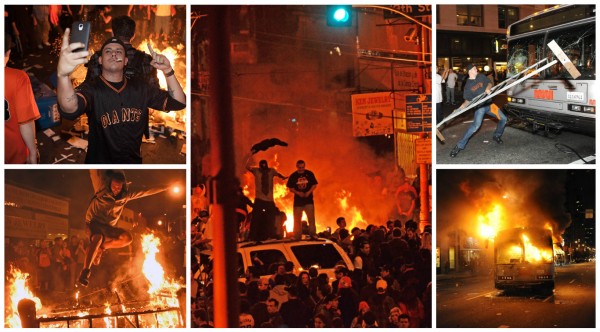 In the above pictures “#BlackLivesMatter” is seen rioting in Milwau🙊……ooh oops! This isn’t a collage of shots from the #MilwaukeeUprising.

This isn’t a community that reached its boiling point after generations of living in socially engineered spaces of deprivation, racial oppression, & poverty. (Milwaukee is THE MOST segregated city in the the country. Segregation is often reduced to geographical separation. It’s more than that. It’s about where resources go & who gets them!)

These aren’t folks who in addition to the day-to-day trauma of peer-on-peer violence also have to worry about the ills of police brutality.

These aren’t folks frustrated with how the criminal (in)justice systems renders them disposable at a very young age. These aren’t the folks whose cries for things like well-funded & well functioning schools, economic development, food justice, & basic compassion are met with calls for draconian “law & order” that throws its people into prisons at one of the highest rates in the U.S.

Nope, none of the above applies to the rioters in those pictures!  Ladies & gentlemen these are FANS of the San Fransisco Giants after a World Series win. Fans rioting. Why are they rioting you ask again? They. Are. Rioting. Because. Their. Team. Won. *sigh*

How did people in general & the media specifically refrain from demonizing, broad brushing, & dehumanizing this community of fans while being unable to manage the same level of decency for a community that rioted after the loss of a priceless life? (regardless of the debated circumstances)

Perhaps it’s the shared idol of sports that helps us empathize with these fans & their violent passion?

Perhaps their hearts are too tied to the idols that empower & uphold the unjust status quo in America to muster up any sort of empathy for the black community in Milwaukee. Whiteness necessitates the demonization of Blackness.

Perhaps we have internalized a kind of capitalist hyper-materialism that places the value of property over PEOPLE made in God’s image. Even mainstream economists like George Greider have said that “as it currently functions capitalism encourages human pathology…”

Perhaps we forgot about Jesus’s “people over property” insurrection in the romanized Jewish temple system? Perhaps our Jesus would set up shop with the money changers? Perhaps he would never exert physical force to disrupt injustice?

When we say, “they are burning down their own community”, perhaps we don’t realize that the businesses that occupy poor communities of color are disproportionately predatory & do little to contribute to the flourishing of residents?

Perhaps its because we know the “Imperial Christ” who yawns at nuclear weapons, & nation-devastating warmongering, and white supremacy, but incessantly browbeats black & brown & poor folks who damage property when the boiling pot of intergenerational oppression spills over.

Folks say, “What would Martin Luther King Jr do?” to shame black folks in Milwaukee. Perhaps we’ve got his legacy stuck on the ‪#‎IHaveADream‬ Speech “loop”. Perhaps it’s time to let the tapes run MUCH further & ‪#‎ReclaimMLK‬! If we did maybe we’d be familiar with his profoundly wise saying that “riot are the language of the unheard.” Perhaps we missed the following quote from King:

“As I walk among the desperate, rejected, and angry young people I have told them that Molotov cocktails and rifles would not solve their problems. I have tried to show them my deepest compassion while maintaining my conviction that social change comes most meaningfully through nonviolent action. But they ask and rightfully so: “What about Vietnam?” They ask if our nation wasn’t using massive doses of violence to solve its problems to bring about the changes it wanted. I knew that I could NEVER once again raise my voice against the violence of the oppressed in the ghetto without having spoken clearly to the GREATEST purveyor of violence today: The United States government. For the sake of those boys I cannot be silent.

Perhaps the above quote speaks to our current moment. Perhaps there are “chilling parallels between President Obama’s overseas drone program and how police treat America’s non-white citizens, with the slightest suspicion escalating into official violence and even death.”

Perhaps we should start listening to the unheard. Start lamenting over the conditions they live in. Start repenting for our complicity. Start showing compassion. Start doing justice. Start praying for liberated imaginations that see creative alternatives to violence.

Perhaps….just perhaps if we were silent about riots over a world series wins,  pumpkins, & the firing of legendary college football coaches then we should be silent NOW.