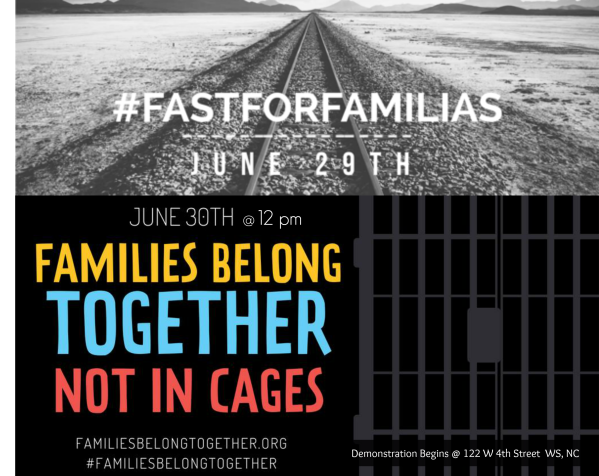 Join the Drum Majors Alliance as we lift our voices privately in prayer this Friday (#FastForFamilias) AND raise them publicly in prophetic dissent this Saturday. (#FamilesBelongTogether)
#FastForFamilias is a campaign lead by a national collective Latinx faith leaders! (For more info on this campaign go HERE.) In calling us to a time of fasting & prayer for asylum seeking families who have been separated at our borders they are lifting up a rich, but forgotten tradition found in our scriptures: fasting as RESISTANCE. Fasting does not call us away from the material conditions of the vulnerable in our midst in the name of some hyper-spirituality. To the contrary, it calls us to concretely challenge, confront, & disrupt the soul’cial idols & systems that perpetuate injustice, despair, & trauma. The left AND right side of our bibles are filled with examples of fasting as resistance. Esther fasted & prayed before she engaged in a love-rooted act of civil disobedience as her people faced the threat of genocide. Nehemiah fasted, prayed, & engaged in deep repentance for the sins of his nation before he began his ‘advocacy work’ for his then decimated nation. The prophet Isaiah declared that the brand of fasting that God chose requires that the faithful “loose the chances of injustice…set the oppressed free, provide shelter for the poor wanderer!” Isaiah teaches us that our love & devotion to God expressed in fasting is authenticated by *acts* of love for disinherited neighbors. (See Isaiah 58) This tradition of fasting as resistance is taken to the highest of heights in the life of Jesus. Before he began his Spirit-empowered messianic campaign of bringing “Good News to the poor” & speaking truth to power Jesus fasted & prayed 40 days in the wilderness.
Furthermore, when we fast & pray we resist the world that is by asking God to empower us to work for the world that could be. When we cry “Your kin(g)dom come” we are implicitly asking that the empires of this world be undone. As we fast & pray we are asking God shatter our numbness & replace it with sensitivity & compassion. When we fast & pray we are repenting of the sins of a nation that has separated black & indigenous children from their families for centuries! When we pray we are asking The Spirit to help us resist the imperial bastardizing of biblical texts like Romans 13 while reclaiming the radical threads of scriptures that tell us that:

“the foreigner residing among you must be treated as your native born. Love them as yourself, for you were foreigners in Egypt. I am the Lord your God.”

Fasting recalibrates our worship & reorders our affections. It reminds us to worship, serve, & bear witness to the borderless love of Jesus & to resist the satanic lure to worship & serve the Nation-state & its arbitrary borders.
So join us as we fast & pray tomorrow, but don’t stop there. We ask that local people of faith come out en masse this Saturday for the #FamiliesBelongTogether demonstration in downtown Winston-Salem. (see above flyer for details.) This local effort is connected to nation-wide demonstrations calling for a complete end to the practice of separating families, the reunification of families that have already been separated, the defunding of ICE, immigrant workers rights, ending for-profit detention centers, & a fix for the DACA crisis! In raising our voices for social transformation alongside people from various walks of life we are living into The Church’s prophetic vocation. Too often we have sold our prophetic birthright for the “pottage of empire” but now is the time to stand & be counted amongst those who believe in justice, peace, & the beloved community of God’s reign! During his childhood, our Savior was a poor, oppressed, asylum-seeking refugee. We betray the very story we claim to have oriented our lives around when we are silent or missing in action in moments like these.
Now is the time to proclaim the radical love of Jesus in this moment of rabid hate, racism, xenophobia, & inhumanity. In the words of America’s greatest prophet, the Reverend Martin Luther King Jr:

“We are now faced with the fact that tomorrow is today. We are confronted with the fierce urgency of now. In this unfolding conundrum of life and history, there “is” such a thing as being too late. This is no time for apathy or complacency. This is a time for vigorous and positive action.”