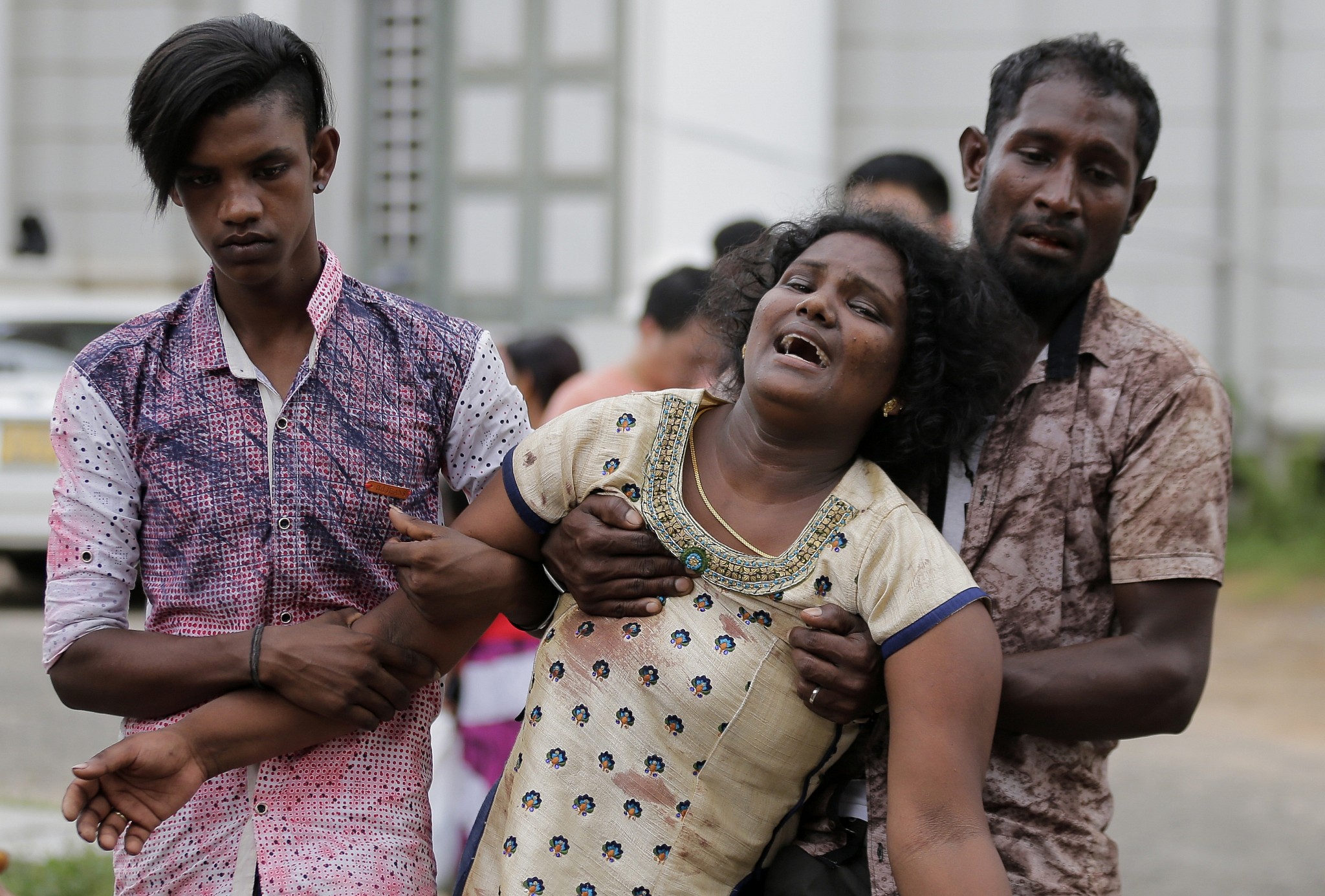 Relatives of a victim of a church bombing grieve outside a morgue in Colombo, Sri Lanka, Sunday, April 21, 2019.

If you’re like me, you woke up this Resurrection Sunday with a sense of excitement. Sometimes it’s hard to discern if this exhilaration is rooted in the central truth of resurrection or the peripheral nostalgia of “Easter Sunday” childhood memories. In any case, that “high” was quickly challenged by the news of terrorist bombings that killed hundreds of worshippers gathered in Sri Lanka. If I’m honest, I was tempted to quickly scroll past it in an effort to keep “my joy” in tact. Sometimes that is a necessary act of self-care but in this case I was convicted that a joy that needs to skip over the pain of the world is not a joy that comes from God. So, I was forced to deal with the tragic irony that violence & death reared its ugly head on a day that we celebrate the overcoming power of resurrection life!

The attack in Sri Lanka is a brutal reminder of the on-the-ground realities of this yet-to-be-healed world. We live in a world where both the horror of Good Friday & the glory of Resurrection Sunday live side-by-side. Or perhaps a better way of saying it is that resurrection cuts through the endless cycle of “Good Fridays” in our world, reframing our understanding & transforming our interaction with them.

But we do not lament, agonize, or mourn like those with no hope. We endure & even embrace the tearful nights of Good Friday for the joyous mornings of Resurrection Sunday set before us.

This sight has not come by the mere reading of words. This sight is the result of a power that is coursing through our veins. Resurrection life flows in & around us even as the death-dealing forces of evil swirl above & beneath us. The wounded, battered, & lynched “love warrior” who rose from the grave has in like manner risen within our bodies.

For this reason we echo the ancient psalmist who said,

“You will not fear the terror of night, nor the arrow that flies by day.”

For this reason we join the chorus of the civil rights movement that looked the deadly machinery of white supremacy in the face & sang,

Or as Martin King said the day before his “good friday”,

“I’d rather be dead than afraid.”

To live bound by fear is to live in direct contradiction to resurrection. To live under the grips of islamophobia, xenophobia, or any other fear of the “other” is to quench The Spirit that gives new life. A new life that can’t be taken out by the old order of things. A Life that says “you may kill members of God’s revolutionary family, but you can’t kill God’s revolution!”

The resurrection confirms the reality that Caesar—and all his historical manifestations—is NOT Lord. Christ IS!

The Herods, Pontious Pilates, Sanheidrens, & zealots of the world continue to conspire against the peaceable reign of Jesus but the reality of Resurrection calls us to pray with the early Church: “Look upon their threats and enable us to preach & embody your healing & liberating word with holy confidence.” (paraphrase of Acts 4:29-31)

For in the words of poet & theologian Julia Esquivel, “they have [unwittingly] threatened us with [the hope] of resurrection!”: 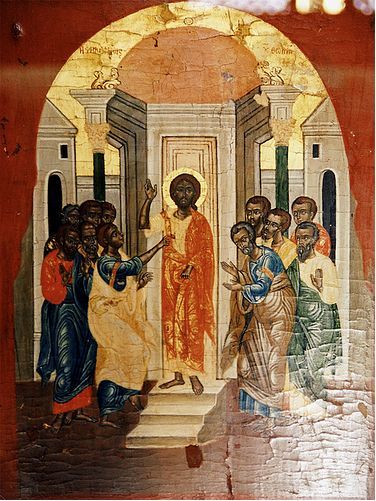 Start this time off with a few moments of complete silence. As you sense that the clutter in your heart & the noise in your mind has dissipated offer up words of gratitude to God. Once your heart has settled itself in God’s presence offer up the following brief prayer:

We believe the Way of Jesus is beautiful and costly

We believe the Way of Jesus is love and truth

Silent Confession of Unbelief- silent confession of the ways we have “missed the mark” of faithfully following after Jesus.

SCRIPTURE MEDITATION –Read the following verses two times. After the first reading pause and meditate on its context and meaning. What word or phrase does the Holy Spirit seem to be impressing on your heart from it? Meditate on that. After the second reading pause and meditate again. What might God be inviting you to personally and the Church to corporately from these verses? Write it down.

“Now the Passover and the Festival of Unleavened Bread were only two days away, and the chief priests and the teachers of the law were scheming to arrest Jesus secretly and kill him. 2 “But not during the festival,” they said, “or the people may riot.”3 While he was in Bethany, reclining at the table in the home of Simon the Leper, a woman came with an alabaster jar of very expensive perfume, made of pure nard. She broke the jar and poured the perfume on his head.4 Some of those present were saying indignantly to one another, “Why this waste of perfume? 5 It could have been sold for more than a year’s wages[a] and the money given to the poor.” And they rebuked her harshly.6 “Leave her alone,” said Jesus. “Why are you bothering her? She has done a beautiful thing to me. 7 The poor you will always have with you,[b] and you can help them any time you want. But you will not always have me. 8 She did what she could. She poured perfume on my body beforehand to prepare for my burial.9 Truly I tell you, wherever the gospel is preached throughout the world, what she has done will also be told, in memory of her.”10 Then Judas Iscariot, one of the Twelve, went to the chief priests to betray Jesus to them. 11 They were delighted to hear this and promised to give him money. So he watched for an opportunity to hand him over.”

Truths, surprises, twists, turns, and socio-political commentary burst through the pages of Mark’s account of Holy Wednesday. With a conspiracy afoot amongst the religious elites of Palestine, Jesus continues to walk through the valley of the shadow of death. The mis-leadership class at the top of the religiopolitical structure cannot afford to allow his movement to grow any larger than it has. Their unholy power and prestige—upheld by a Faustian bargain with imperial Rome—is under threat by his prophetic campaign. Jesus, in the tradition of the prophets before him, has brought the silenced wails of the margins to mainstream Jerusalem. His articulation and embodiment of God’s heart for “the least” & “the last” has pulled on the heartstrings of the crowds gathered in Jerusalem for Passover. The powers know that if they publicly arrest Jesus it will incite a riot amongst those who hang on his every word and long for the Kin’dom he is inaugurating.  (Mark 14:1-2) Through Jesus’s ministry they have felt seen, honored,  heard, & called higher. To see Jesus arrested in broad daylight would only re-induce their painful sense of invisibility, dishonor, & lack of voice in society. To quote Martin Luther King Jr, “a riot is the language of the unheard.” Days earlier, Jesus alluded to this reality when he lamented that the power structure of Jerusalem was unwilling to “embrace the things that make for peace.”

The scene of Holy Wednesday says a lot about Jesus’s habit of communing with the despised and rejected. He is in the house of Simon the leper. In addition to the physical pain, to be a leper in the 1st century is to endure social shame, isolation, and exclusion. In verse 3 an unnamed woman emerges as what some have described as “the first Christian.” This may seem like a stretch but there a few reasons for this assertion. First & foremost, her special place in the Gospel narrative and in church history is given by Jesus himself:

“Truly I tell you, wherever the gospel is preached throughout the world, what she has done will also be told, in memory of her.”

To the backdrop of failing male disciples and a soon-to-be-revealed betrayer, Jesus lifts the acts of this woman as a model of faithful discipleship. This pushes against patriarchal norms and assumptions both in Jesus’s day AND ours. Our faith is still deeply infected with the false notion that women are second-class citizens in God’s beloved community. Yet, this narrative puts a woman at the center of what it means to be a disciple in a way only rivaled by Mary of Nazareth, mother of Jesus.  Secondly,  her act of anointing Jesus with expensive perfume shows that she took Jesus’s prediction of his execution and resurrection seriously. She concretely acted on what she heard. This is embodied faith! The death of Jesus was not an “abstract idea” to ponder. It was a truth to encounter.  Lastly, she demonstrates to us that true solidarity with the poor is sustained by deep intimacy with Jesus. What she did was not a “waste” as Judas described it. It was an act of faith In God expressing itself through love. The love of God sustains and empowers the love of neighbor. Gustavo Gutierrez’s words are helpful:

“There is no easy triumphal road for the life of faith. There are those who, when they become absorbed by the political demands of the liberation commitment begin to live the tensions of solidarity with the exploited, then find themselves belonging to a church many of whose members are staunch advocates of the prevailing social order. They then lose their dynamic faith, and suffer the anguish of a dichotomy between being a Christian and being committed to political action.

More cruel still is the case of those who suffer the loss of the love of God in favor of the very thing that that love arouses and sustains—love for their fellow human beings. A love like that, unable to maintain itself in the oneness demanded by the gospel, never comes to know the fullness locked up inside itself.”

In closing, we must deal with the ways that empire religion has misinterpreted Jesus’s rebuke of Judas.

“The poor you will always have with you.”

Time and time again this verse has been quoted to legitimize exploitative systems & to minimize the responsibility of The Church to alleviate human suffering. Read properly, “this is a statement about the social location of the church, not about the social necessity of poverty.” Tragically most western Christians have gotten it backwards because “the sight from which we read it is insulated from, rather than in solidarity with the poor.” Lastly, if we spent enough time in the 1st Testament we would know that Jesus was alluding to & quoting from the Jubilee tradition. (Deuteronomy 15) An every 50-year social tradition of debt release, slavery emancipation, & return of lost land that God set in place for the nation Israel to avoid wealth stratification, inequity, generational poverty, & cycles of injustice.

Guide us, O God, closer to the Cross. Keep us from betraying you on the Way. Keep us in Your love. Help us remember, honor, & imitate women who bear Your name & embody your reign.

In the Name & Spirit of Jesus we pray, Amen.

Now unto The One who is able to forgive sins, heal bodies, liberate the oppressed, & create beloved communities out of the ashes of injustice & division; to the only wise Lord who came not to dominate, but to serve & give His life as a ransom. May His love cover, carry, & keep you til’ we meet again. Amen.