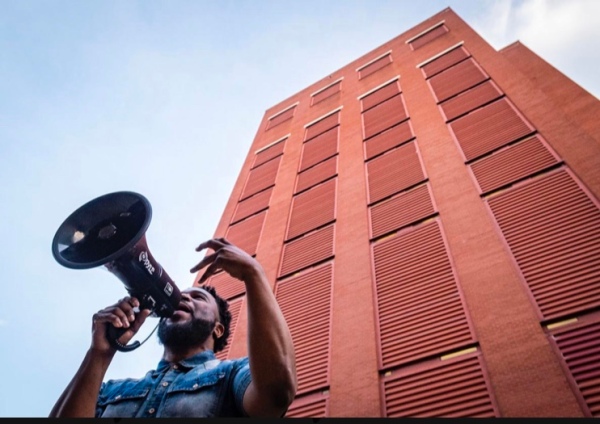 This past Saturday, Drum Majors Alliance co-founder, Terrance Hawkins, delivered a speech at a protest calling for humane treatment, COVID-19 testing, and release of inmates from our local detention center, starting with the most vulnerable. (Read the demands HERE.) The following is the written adaptation of that speech:

I’ve said this at least 100 times over the last few months, but it must be said again: Covid-19 is apocalyptic in the truest sense of the word. Apocalypse means to “unveil, unmask, or uncover something” and this pandemic has unveiled & unmasked the injustice and isolation that plagues our city, state, nation, and world.

And what a deadly pre-existing condition it is!

From the days of Jim Crow Sr to our Jim Crow Jr moment, Winston-Salem has for or all intensive purposes, been an Apartheid City.  We practice apartheid economics, medical apartheid, and educational apartheid. There are literally TWO Winston Salem’s. One marked by a history of power & privilege and another marred by a history of disinvestment & dispossession.

As others have  put it:

Due to this city’s history of apartheid, some communities are riding out this storm on boats that are far less seaworthy.

Our elderly and immunocompromised loved ones are uniquely vulnerable.

Our unhoused neighbors have been uniquely vulnerable.

And those imprisoned in our detention center are uniquely vulnerable!

But we believe that our freedom and flourishing and future is bound up with the freedom, flourishing, & futures of the most vulnerable.  Yes, as a son of the radical Black church tradition, let me put a little scripture on it. The writer of Hebrews wrote:

“Continue to remember those in prison as if you were together with them in prison, and those who are mistreated as if you yourselves were suffering.”  (Hebrews 13:3)

Fannie Lou Hamer, another child of this tradition, taught us that “nobody is free, til everybody is free”

Or as Martin Luther King Jr. put it:

“We are caught in an inescapable web of mutuality, tied in a single garment of destiny. Whatever affects one directly, affects us all indirectly. Injustice anywhere is a threat to justice everywhere.”

The lack of response to the crisis in our local detention center demonstrates that the forces of UNFREEDOM are strong in the city of Winston-Salem. Don’t let the power structure of this city fool you when they “cosplay” as freedom fighters! We know better.
When COVID hit, many of us forcefully said that the city must break pre-existing patterns to save lives in the present AND to chart a new path for the future.

But what did they do? Well as I put it a couple months back:
“Winston-Salem’s response to COVID-19 has been SO “Winston-Salem.”

This was the pattern we saw:

1) Winston-Salem/Forsyth County put forth unsatisfactory COVID-19 response plans that funneled the money into our city’s bloated non-profit industrial complex.  The wealthy got to play the hero through philanthrocapitalist endeavors.

3) In the wake of sustained pressure, City/County officials implement a diluted “great value” version of the demands that emerged from grassroots groups.

4) With the help of the local media apparatus, city & county officials announced updated plans as if they were entirely a result of their own thoughtfulness & commitment to justice.

Now they are holding town halls to “dialogue about injustice” with panel lineups that consist primarily of folks who hold power. But this way of getting to the bottom of a city’s commitment to justice ain’t in alignment with the tradition I come from.

“Well, if one really wishes to know how justice is administered in a country, one does not question the policemen, the lawyers, the judges, or the protected members of the middle class. One goes to the unprotected—those, precisely, who need the law’s protection most! —and listens to their testimony. Ask any Mexican, any Puerto Rican, any Black [person], any poor person—ask the wretched how they fare in the halls of justice, and then you will know, not whether or not the country is just, but whether or not it has any love for justice, or any concept of it. It is certain, in any case, that ignorance, allied with power, is the most ferocious enemy justice can have.”

This tradition teaches us that we must let the lion tell her part of the story so that history can no longer exonerate & glorify the hunter–while denigrating & dehumanizing the hunted.

Black, Brown, Indigenous people have always been viewed as cage-able, enslavable, killable, & discardable.  But in this moment we are calling for a radical turn, not a neoliberal tweak.  We don’t want the thread of enslavement to get more “colorful.” We don’t want the thread “painted” or tied in a pretty bow of “diversity.” In the words of Fannie Lou Hamer, “we are sick of symbolism we are fighting  for our lives.”

What do we want? We want this oppressive thread broken, dismantled, and abolished! We want a city and a world rooted in the understanding that you can’t cage, handcuff, & court case your way to peace. Peace is the offspring of revolutionary love & transformative justice. Peace is rooted in acts of care, restoration, healing, & the pursuit of liberation! Peace is a mighty river flowing from the throne of the Holy One! Our city will never live into its name (Salem/Peace) til it lets this river wash away the stains of apartheid.

I leave you with the words of martyred BPP chairman Fred Hampton:

“Peace to you, if you’re willing to fight for it!”